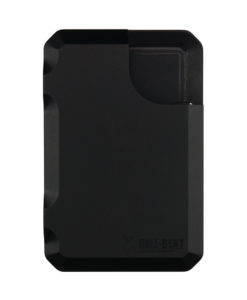 Made of Billet Aluminum, this Hard Anodized Black 3.0 HELL-BENT® Wallet possesses natural RFID blocking properties that will help to protect you against electronic pickpocketing and skimming. It has adjustable retention and is available in both medium and large sizes.

The 3.0 RFID metal wallet is compatible with all of our Titanium Money clips! Grab one now, and experience the newest and hottest product to come out of the depths of HELL-BENT®!!

Your combat wallet will come with skid plate to help slide your cash in and out of your money clip easier.

ALL ALUMINUM WALLETS AND CLIPS COME WITH A COMPLEMENTARY SKID PLATE. ADDITIONAL SKID PLATES CAN BE PURCHASED IN THE WALLET ACCESSORIES SECTION.